It's the Little Things...

When we arrived in Haiti on the 15th, we were blown away by the welcome, house, and love that we received! It was a blessing to see familiar faces in the airport. Throughout the first few days, we found things that we take for granted so easily! We realized, it really is the little things that make such a difference. Upon arriving on campus, the entire staff was standing outside our door to our new home so they could welcome us. We stepped in to a finished house, with curtains, decor, dining table and chairs, beds that were already made for us, and bathrooms prepped and ready for our family. While this was an immense blessing, the little things hit us. The staff prayed for us in our new home. They carried our luggage into the house. Then they gave us a couple bits of info we needed, and left so we could rest and start to get settled. These things made the house feel like home very quickly. The following day we received a gift basket of fresh fruit. This too was an immense blessing as we knew we would not make it to the market for a while. Our main meals are served in the dining hall, but there is rarely any fruit at all. When there is fruit, it is canned. Anyone who knows our family can imagine what a gift like this would mean to us. While it was simple, it was a huge blessing. After we began to get more settled, we found many "little things" that made a difference. We shopped on the 17th and bought some fans for the bedrooms. The one a/c unit in the house is in the living room and the bedrooms get rather warm at night. The fans we purchased were stolen from the back of the truck when we got stuck in a traffic jam. So, one of the other staff members when searching and found 3 fans for us. This has kept the house much cooler in order to allow everyone to sleep well. We also purchased towel bars which was so exciting! It is something so simple. After having a few days of trying to stash 7 towels someplace and keep them clean while keeping everything else dry, this little thing was great! We found it exciting to be able to have a small fridge in our place. It is also a blessing to live in 1100 square feet! In fact, I think I could do 800 with our family of 6. Some of the other little things are that we did not lose one bag in the airport. We arrived and had every single bag that we had checked. The kids were troopers! They carried luggage, walked all over, and were fairly excited to do it all! We have learned more Kreyol, made new friends, and started to learn how to get around somewhat. We learned that we can splurge on a case of sprite (glass bottles) for $19 USD. When we want our next case, we can return the glass bottles and pay only $8! While we do not drink a lot of pop, this is a great splurge for us to have. We keep praying for simple things that will help the kids not be so homesick. The tips we are getting (such as the Sprite) are priceless! So, we have learned to thank God for the little things. We thank Him for the breeze, new friends, laughter, fans, snack food, clean water (even if we can't drink the water in our home), strong children, adaptability, books, safety, electricity, and a dry place to go when the rain is pouring down. We would thank God for things like that in the states, but now we really mean it! We have reaped the blessings of NVM and our support team. We thank God for our support team every time we remember them. What an immense blessing they have been to us! Until next time...thanking God for all the little things! Cathi
Posted by Cathi at 12:20 PM 1 comment:

The Ortiz family has now been on the ground in Haiti for a few days. We had a great reception by the Haitian and American staff here at NVM. They lined up outside of our new house and cheered as we drove up, led us on a tour of our new place (which was humbling, since it is far more than we expected, even after seeing pictures of the progress), and then prayed for us in our new home. The first couple of days, we unpacked our bags, got acclimated, worked on Creole, and we’re still trying to get into a regular rhythm of life. I imagine we’ll be working on that for a while!
Weather-wise, the days are hot – mid 90’s, but the evenings are great. They cool off and there is a nice breeze. There have been a few nights were it has rained. We are in the middle of the rainy season, which goes for another month or so. Since our house is next to the future hospital, we can hear the rain hitting the metal roof as we fall asleep. For alarm clocks, we have the sun itself, which shines brightly before 6am, and a couple of roosters who follow soon after!
Saturday was a national holiday – Flag Day. The NVM school had a group of students that marched through a few villages along with a band, singing, dancing, and showing some national pride. What impressed me the most is that these kids are the future of Haiti and they are being brought up with hope. Not just hope because they are getting an education, though that is certainly great; They have been given a hope in Jesus Christ with which they can infuse their generation and their country. There is hope in him! The kids were impressive and drew quite a bit of attention. We had a great deal of people follow along and at certain points, they would stop and dance in front of the crowd. Our family rode in the back of a pick-up truck, waving our own Haitian flags and following the procession. Several other kids not in the parade walked alongside the truck for a while and we struck up conversations with them. At the end of the parade, we somehow piled about 30 people into the back of this truck to get back to NVM campus. It reminded me of the tap-taps. Tap-taps are trucks that are used like taxis. They usually have a covered back, with benches in it. People climb on and pay a guy sitting back there. When they want to get off, they tap the truck. There is a saying about tap-taps here: “How many can fit in a tap-tap?” “Always one more.” That certainly felt true of our truck that morning! 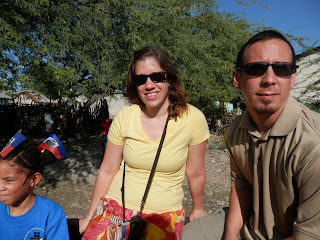 Sunday morning we attended the campus church. As always, we enjoyed worshiping and singing with the Haitians. They are incredibly passionate people and it comes out in their corporate worship. We were introduced to the congregation as a missionary family and I was asked to say a few words. I declined talking in English and addressed them in Creole and told them that we were glad to be here and briefly explained that when we were here last, God showed us that Haiti was to be our home.
They certainly liked the sound of that – or that I said it Creole, or both – but once again, we received such a warm welcome. That evening, we led both teams that are here as well as the staff in songs to worship together and enjoyed that time, as well.

Our timing to come could not have been more perfect (God’s timing!). Two days after our arrival, Mark Thompson, the new executive director of NVM arrived, as well. He will be Pastor Pierre’s counterpart in the States. Mark is here to spend time with the staff to get to know us, as well as meet with Pastor to get in synch with him, and also to set goals and priorities for the ministry. It’s been great to sit and talk with him, be encouraged, and know the vision and the steps for NVM’s future. There is a lot of transition happening here with several people leaving this summer and new people coming on board – to include us. 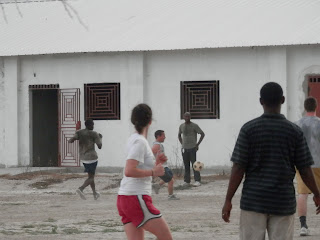 Tonight, we played a friendly soccer game: Haitians vs. Americans. Between the two short-term teams here, they put together a team and asked me to join. It was great fun and perhaps the only time I’ve seen the Americans beat the Haitians! American Airlines lost my right running shoe, so I had to use another pair (Mikalah’s tennis shoes!). Within the first 5 minutes of the game, I was missing the whole sole to the right shoe. Though I finished the game alright, I think I’ll be feeling it in the morning…
Posted by Gami and Cathi Ortiz at 8:27 PM 3 comments: