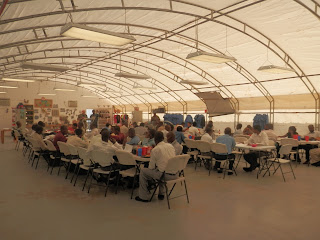 The last twenty-four hours have been long, but an incredible blessing. About this time last night, I was finishing writing up my final paper for one more semester of Seminary. That's one more class down and still trucking along my degree plan. I didn't end up finishing the paper until about 3 am to then get ready for bed, to get up at 5:55 am! I slept around 2 hours in order to get up in time to get ready for the pastors' conference this morning. I began to get the tap-tap ready so that I could go with Clersondy (one of our Haitian staff) to pick up the pastors. I wanted to see where they got picked up in the event I ever have to make that pick up by myself. Jim has been managing the pastors' conferences for the last 14 months and has had around 60 pastors come consistently. This morning we had around 40 pastors. When we asked about the text message that was sent out earlier this week, 75% of them acknowledged receiving it, however, they said there was an error in the message which could have easily accounted for the lower attendance today. Either way, it was a great morning. We served breakfast, sang a few worship songs, did an activity, met in small groups, and had a teaching. Jim made sure to introduce me to the group and allowed me to address them at the beginning. Then, I was able to participate in facilitating worship, leading the activity, guiding the small group time, then adding closing remarks to the session before praying at the end. The activity we did today was a 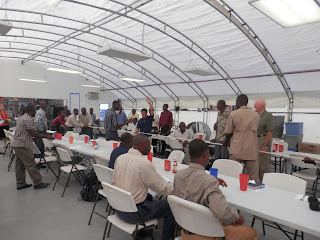 tug-of-war (which they had not done before). We made four teams of four men each and they competed for top place. They absolutely had a blast and they got into it quite a bit. We had one team literally get dragged across the floor, because they refused to just give up! It was hysterical. Jim tied it in later as an illustration of spiritual warfare. For part of the small group time, we had the pastors  discuss in their groups topics they deem important that we can address in later conferences moving forward. I was surprised at some of the responses, ranging from practical ministry topics to deep theological studies. I look forward to sharing more with these men, building these relationships, and begin to engage some of them in a more one-on-one setting. One pastor this morning, Clermont, came up to me afterwards to give me a picture of his church. He pulled it out of his backpack and wrote his name and phone number on the back. We talked for a little while and I found out that he pastors a small church in Croix-de-Bouquets which is not far from NVM. He asked me to call him so that we could get together later. I was so encouraged that although I was not expecting it, God allowed me to connect with someone on a personal level at my first pastors' conference.
Yesterday, we had a team of 17 fly in. They will be helping us out with English Camp this next week. After the pastors' conference and lunch, I took them on a campus tour, explaining our pillars of ministry, talking about our current ministries and the vision for the future. At choice locations throughout the tour, we stopped to pray for the ministries and staff at NVM, for Haiti itself, and for their upcoming week of ministry. It has been a long day and I am absolutely exhausted. But at the same time, I am feeling so fulfilled in what I get to do.
Posted by Gami and Cathi Ortiz at 6:00 PM