Weddings and a Funeral 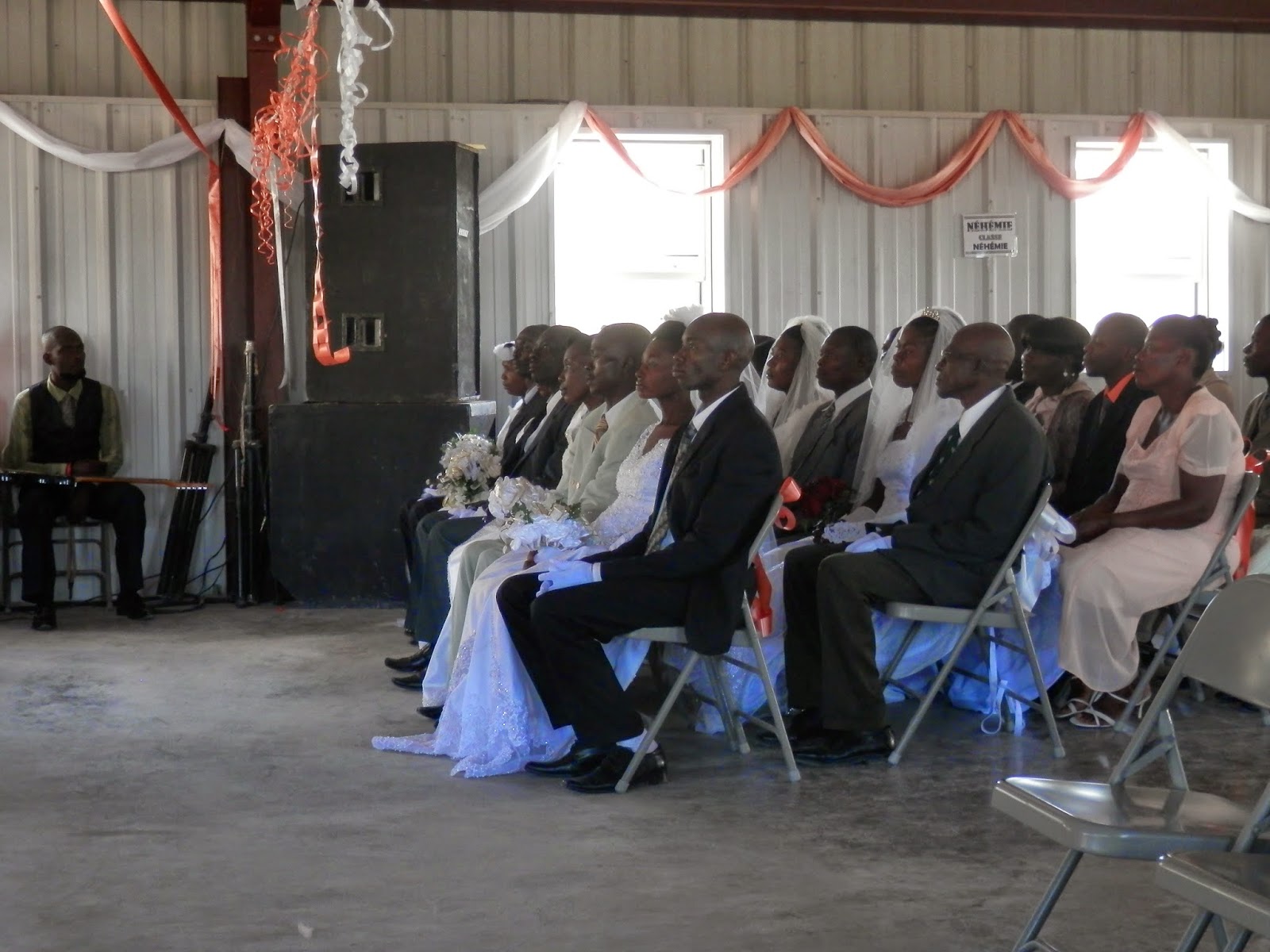 A few weekends ago, I was invited to go to a mass wedding in Onaville. The date just happened to coincide with the day of the church anniversary celebration as well. This is a church that NVM planted in Onaville (largest tent city after the earthquake of 2010) and has grown considerably in the short 3 years it has been around. In preparing for the wedding, I helped Pastor Massillon with some of the logistics in getting wedding dresses and suits and rings for the couples. Thank you to all of you who were a part of that. It was really a special day. Six of the couples were all married on December 7. We were supposed to start at 7:30 am, but started a bit late because one of the couples had not yet arrived! The couples were all decked out, looking great. The vows were those we are used to hearing (just in French/Creole). But there was a lot about the ceremony that was not what we were used to. First of all, the fact that it was six couples all being wed at the same time was rather different. As a result, there was no procession of any bridal party or the bride(s). There was no unity candle, no runner, no one giving the brides away. Yet, in a culture where it’s ok for men to have multiple women, these  couples vowing to love each other exclusively and making a commitment before the church and God was such a huge statement. 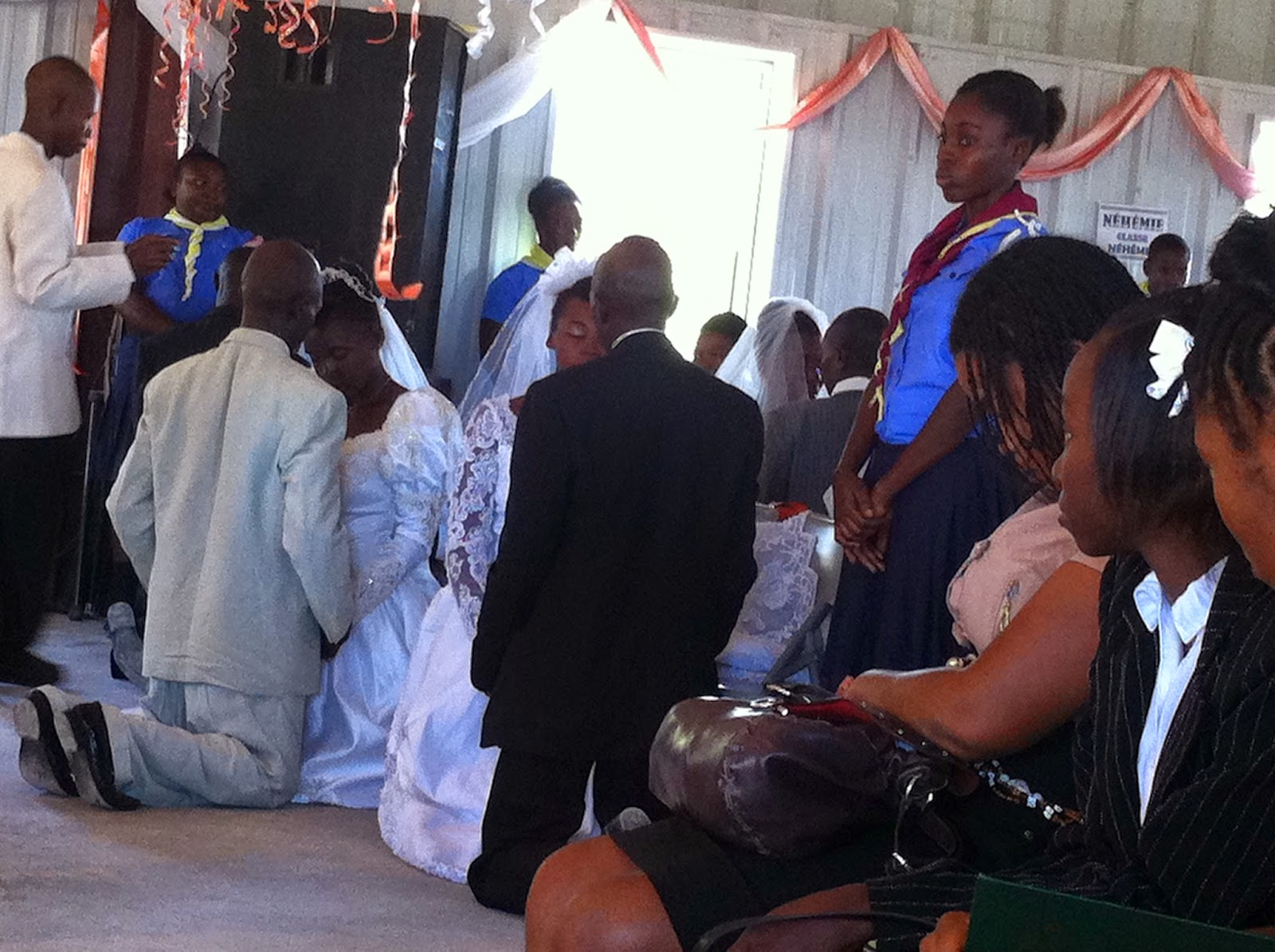 Though I wasn’t expecting it, I was invited up after they had all said their vows and was asked to pray for them. They all knelt down, facing their new spouses, and bowed their heads as I had the privilege of praying that God would bless their marriages, families, and that they would be a light and example to others God’s faithfulness. Church lasted another few hours (until 12:30) and then came the reception! We were honored by being served goat meat, but there was chicken, beef, fish, rice, beets, and all sorts of other cultural delicacies. There was lots of food and people just enjoying fellowship together. It was truly a day of celebration! 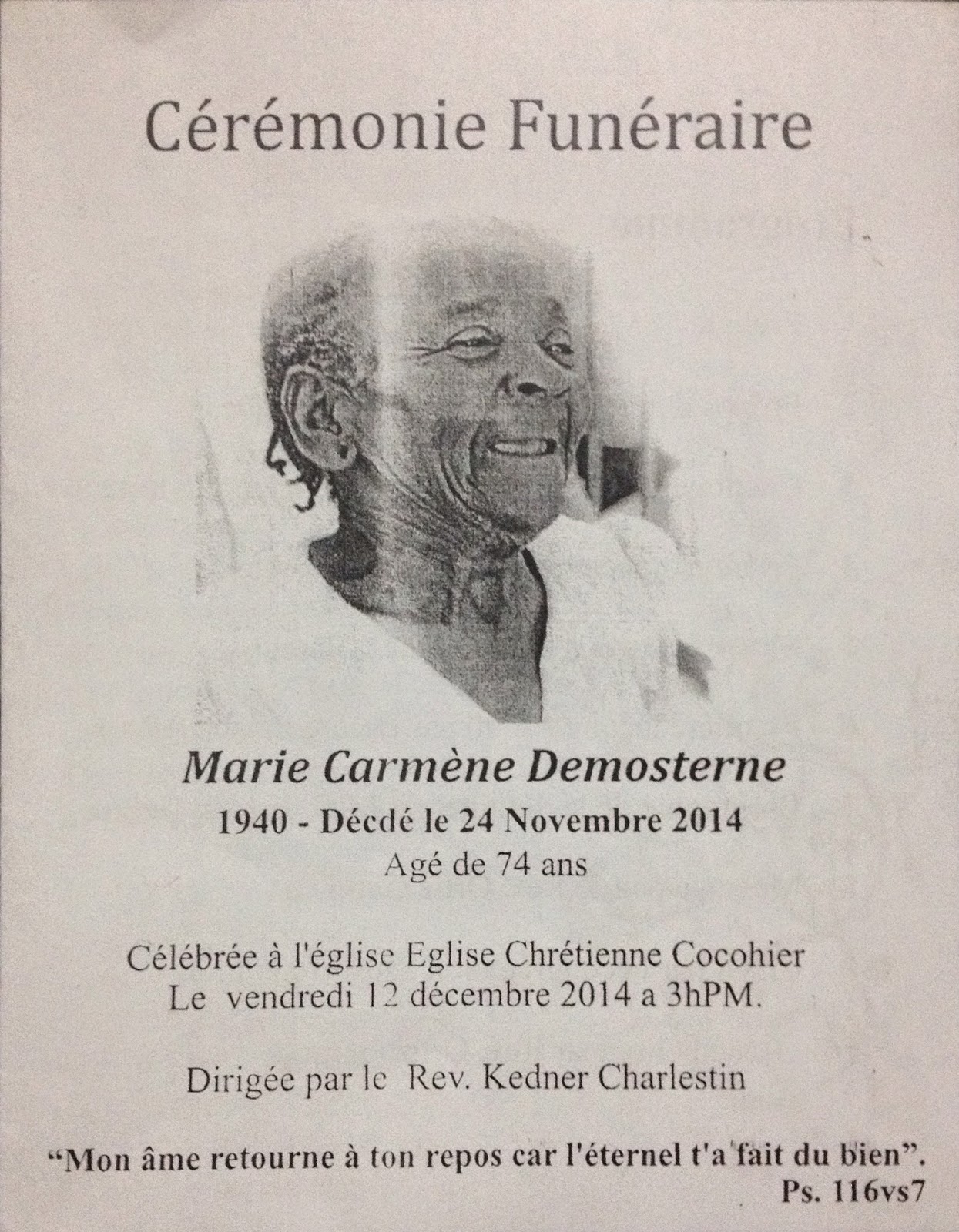 Then, just days after this celebration, I got news that an older woman in our church had passed away. In fact, Carmène hadn’t been at church that last Sunday due to illness when I was in Onaville. This little old lady was full of spunk. She was a short and tiny framed woman. Carmène was 74(ish) years old when she died, but she was energetic up to the end. I couldn’t help but smile, seeing her dance her heart out every Sunday in worship. She was a sweet lady. She would always greet me after church with a big hug and kiss. I was asked to do the funeral last Friday. Having never done one in Haiti, I asked a lot of questions of cultural importance. The elements of the funeral were essentially the same. However, the way in which grief is expressed in this culture is a bit different from what we’re used to in the States. It reminded me of studies of culture in biblical times. Jesus crashed several funerals where people were wailing inside and outside the house, with plenty of professional musicians to play loudly, etc. After the service, there was a processional march with the casket to the grave site. The church was not far from her house (which is where the tomb/sepulcher was). Along the way, others from the community joined the procession to the grave site. That paints the picture a little more accurately for this culture. Yet, the hurting is the same. People lost a mother, a sister, a friend. I preached a short sermon focusing on the fact that as believers, we do not mourn like those who have no hope. Perhaps due to the more “vocal” nature of this culture, it was obvious that there was indeed hope in the midst of the mourning.
Approaching two years in a new culture, there are a few observations that I have made. Sin’s consequences bring grief and sorrow in any culture. Death is a universal truth and proof of the fall. Yet other aspects of culture that are counter-biblical bring their own consequences as well. And they deprive people of joy and fullness. Jesus didn’t just die for us to go to heaven when we die—he restored our relationship to God, which starts in the here and now! And the joy that comes from knowing Him is another aspect of life that crosses cultural boundaries. We have rejoiced with people through baptisms, in dedicating their children to God, in marriage, and in a number of other ways where God was being honored and glorified. Regardless of what the cultural  customs and norms in any country, there is nothing that compares to knowing God and making Him known!